(Photo from recent 10th bday at Thunder Road – go kart cupcakes) I have a confession to make… I love Pinterest. If there was a job where testing out and evaluating the ideas on the site was your sole purpose, that would be awesome. Pinterest moms get a lot of flack though. I don’t do the Pinterest stuff to impress anyone, I do it because I love it. I like finding new recipes or tricks for doing gardening stuff or Halloween costumes – it’s full of ideas. Cam has even looks up kayak modifications for fishing on Pinterest. Anytime I try a new recipe, the boys say “did this come from Pinterest?!” Sometimes it just takes a spark to get me going.

Birthday cakes and cupcakes have always been an adventure. Aside from our first born’s 1st bday, (long story but let’s just say I was a paranoid 1st time mom & didn’t want to give him sugar so his cake had flax & stuff in it – poor kid) we’ve tried to make their bday cakes be fun and meaningful. Not to impress anyone else, but to see the excitement from our kids. It’s something that we both like doing – Cameron gets involved in the design and implementation of the cakes. He’s also a little more particular than I am. So his attention to detail and my baking skills make for a fun combo.

After the first bday fiasco, Dallas’ 2nd bday cake was a 3D John Deere tractor – complete with chocolate donut wheels and Oreo front tires. That was before Pinterest came around… We thought of that ourselves. Since then, there was a Bob the Builder, Mack truck from Cars, Death Star, Elmo, Ham the Pig, Sponge Bob, Minions, Dallas Cowboys star, light saber cupcakes … Just to name a few. We try to make them related to what the boys are into at the time. Myles had a Ninja Turtle bday one year. I made masks for all of the kids and made Ninja Turtle cookies and cakes. The huge smile on his face made it all worth while. 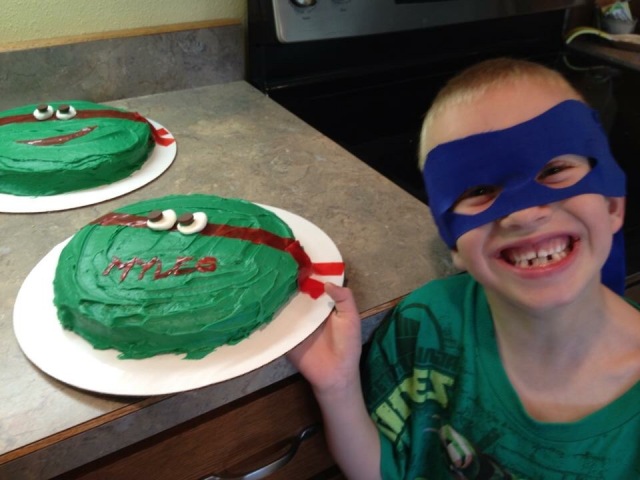 I’m not just making cakes, I’m making memories. However you do that with your kids is up to you. I don’t judge anyone who buys the stuff from the store! If you don’t find this fun, don’t do it. Your kids will be just fine with a store bought cake.

Last summer, during Myles 9th bday, I was still recovering from surgery and not feeling particularly festive, so he just had a couple of friends to a movie and lunch instead of a big party. When he said that his summer wish list included a bday party, my mommy guilt took over and I agreed. He couldn’t decide on what kind of cake to have. Since we were going to ride go karts, we went with go kart cupcakes. (Also made it easier to include his friend who has gluten allergies if I made gluten free cupcakes) He loves Minions still so we had both kinds. It was a hit.

I hope when you see Pinterest ideas, you think of some fun new things to try instead of feeling like you’re not enough. Even though I like searching through there, not all are winners – making dried strawberries in your oven doesn’t taste like candy, it tastes like mush. It doesn’t discourage me though, I just search for something new to try. Peace be with you on your journey of enough.