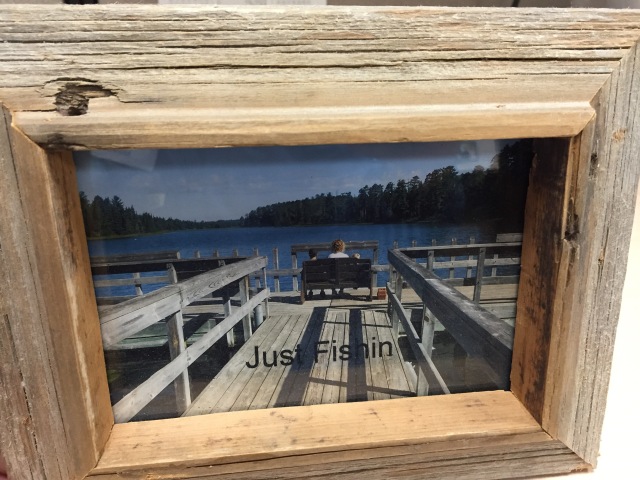 No, we aren’t fishing just yet. This picture was taken a few years ago of me and my boys fishing at Itasca State Park. (The barn wood frame was made by my husband.) One of my favorite songs is a country song – Just Fishin’ by Trace Adkins. It talks about a dad fishing with his daughter. She thinks they’re just fishing, but they’re really bonding, talking, spending time together. While we tend to focus on big things to do with our kids, sometimes it’s the small stuff that means the most. As my kids get older, I tend to wonder if I’ve done enough with them. Did I do enough of the things that help create those bonds that last forever? Did I listen enough to them when they were smaller to make them feel comfortable talking to me when they get older?

I wonder about these things, and then my 13 year old goes on and on about fishing tackle, kayak modifications for fishing and different kinds of bows and bow hunting… and I think, maybe I’ve done ok. He did his radio commentary for his speech meets about fishing, and how you should go fishing as a family & how it brings you closer as a family. He did this on his own, and reading it kind of made me melt. I’m not telling the story to make you think I’ve got it all together- far from it. I’m telling you so that maybe you realize you’re doing a better job than you think. To my 9 year old, I’m still a super hero but I know that won’t always be the case. This 13 year old boy thing is new territory for both of us though. We are figuring it out together & sometimes I get clues that it’s going to be ok.

If fishing is something that opens the door to other conversations, then I will get my rod and reel ready. I’ll also be prepared to cook up a fish dinner. And he thinks we’re just fishin’.

Peace be with you on your journey of enough.